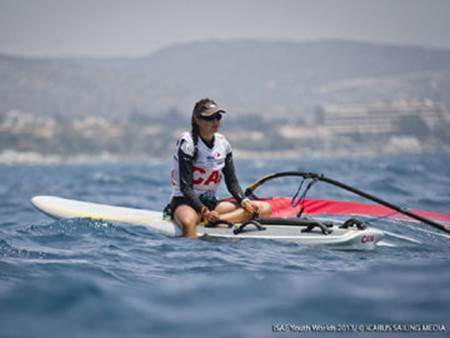 The 2014 edition will take place from 12-19 July in Tavira, Portugal. Tavira will play host to over 300 of the world’s top youth sailors from 12-19 July. Here is a glance at the Canadian team: RS:X Boy – Gabriel Verrier-Paquette (CVDM) Verrier – Paquette solidified his qualification with an impressive performance at the 2014 Miami OCR event, sailing on the bigger 9.5 sail and placing 13th overall. His hard work over the past year has paid off and will continue to reap rewards.

This will be his second consecutive Youth Worlds event. RS:X Girl – Fannie De Alcala (CVDM) Qualifying via the 2014 Miami OCR, Fannie has tested her skills against high level competition. Similar to Gabriel, De Alcala’s training program has displayed an improvement in her sailing over the past year.

This is her second consecutive Youth Worlds Event. Laser Radial Girl – Ellie Shaw Ungar (RVYC) Sailing consistently well at both the Canadian Youth Championships and the Laser Radial Midwinters, Ungar has shown the merit of consistent training and hard work.

This will be Ungar’s first Youth Worlds Event. Laser Radial Boy – Graham Harney (RVYC) Following a 3rd place finish at the Canadian Youth Championships Harney was forced to make a comeback and delivered a top ten performance at the Midwinter East Regatta, clinching his spot on the 2014 team.

This will be their first Youth World event. 420 -Canada will not be sending 420 teams to this edition of the youth worlds. For more information about the Canadian Youth Sailing Team click here. ISAF Youth Sailing World Championship Website – www.isafyouthworlds.com

Sail Canada (As Amended by ISAF)